Today marks the first major release of the Invoicera API. This is an important milestone for all third-party developers who intend to integrate Invoicera platform with any of their existing or new applications. The Invoicera API is simply another way to access your Invoicera data and it enables the third-party and custom tools to programatically access and interact with the Invoicera service.

When we started a few months ago, we tried moving as fast as we could, doing whatever it took to hack-up code and flash new features in this API. As we progressed, we learnt how to do a few things, but more importantly, we learnt how not to (do a few other things!). Sometimes this led us to optimize a few key API modules, whereas sometimes, we chose to start all over again.

After a private Beta launch back two months back, we’re launching the Invoicera API v1.0 today.

For those (the technically inclined), who are keen to know its haves and have-nots, lets begin with the have-nots.

Although the API obviously supports Invoicing, it currently does not support exotic features such as template re-selection for invoices (or estimates). API token reset is also a chicken-and-egg problem that we chose to hatch on a later date. Similarly, username-password based logins are important for third-party applications where API token needs to be typed-in. Since this (minor) issue is again something that has workarounds (like QR-Codes) we didn’t think it needed to be prioritized for today. (Incidentally the Invoicera mobile application would use QR-Codes to login to the API, which is the reason why we’ve quietly launched QR-Code in the ‘My Settings’ page 🙂 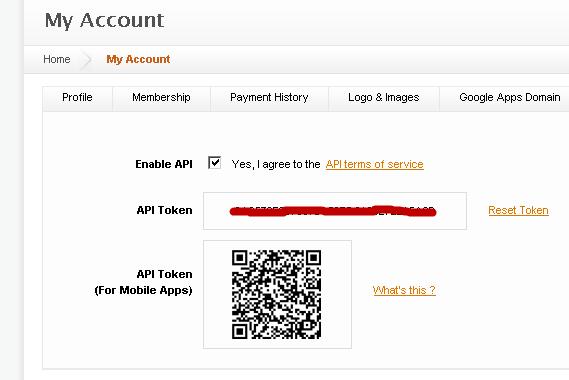 Further to this, we’re obviously expecting a lot of feedback from our users who’d be a big help for us to prioritize enhancements to the Invoicera API.

Coming to the haves, Invoicera API has almost all of the must-haves, which would allow you to build an extensive mobile (or tablet, or chrome, or … ) app without much looking around. With sample working code (for PHP) and template XML provided for on the website, building an app of any kind (viz. iOS / Android / Chrome / Ovi / etc..) should now be pretty-close to cake-walk.

To enlist (besides the obvious Invoicing module), we ensured that Invoicera API (v1.0) supports most major Invoicera features right-out-of-the-box !

Further, as of this v1.0 release, the API supports only XML, but we do plan to support JSON soon. REST is a possibility too, but we’re really looking for a lot of user-feedback to prioritize this ahead of feature enhancements. As you would have noticed, this is the chief reason why the API URL sports a relatively structured schema (/api/xml/1.0/) which could later be extended to something like /api/json/3.0/ as and when required.

All-in-all, we’re very happy with the way Invoicera API has come out to be, and would like you to give it a try. Obviously we’re open to feedback, but more importantly, we’re eagerly awaiting your app (amongst a plethora of Invoicing apps) to complete the Invoicera ecosystem.

Over 3 Million Users Have Chosen Invoicera - Get Started Today